How Long Crack Cocaine Remains in the Body After Use? 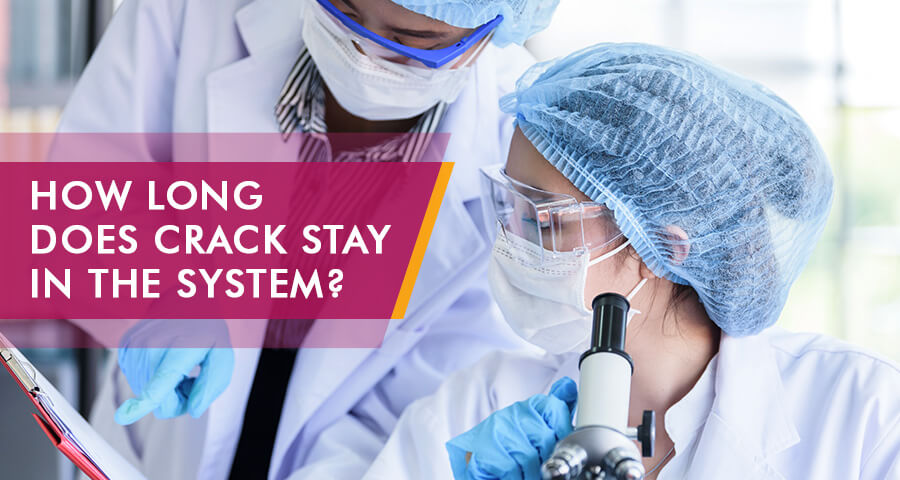 For the majority of illegal drugs, some tests can be run to detect their presence in the body. These tests can be used for different reasons, including determining how much is in the system of a patient entering detox, finding out if a child is hiding drug use, ensuring that a parolee has not violated the terms of their release, and even deciding whether or not a person is employable. Because these tests are common and can have significant consequences for the user, many want to know: how long does crack stay in the system?

Metabolism of crack is rapid, which means that its effects come on quickly and end quickly. It also means that it moves through the system at a rapid pace and crack ingredients are not in the body for long. This is good news in terms of passing tests, but bad news regarding addiction and overdose, as it fuels more frequent use of larger doses.

Metabolism of Crack in the Body

Crack cocaine is a widespread street drug in the United States. It is considered to be the purest form of cocaine, and despite that, is cheaper and easier to access than its powdered counterpart. Approximately four percent of all Americans will use crack cocaine in their lifetime, often suffering from crack symptoms as a result.

How Long Does Crack Stay in The Body?

Crack half-life is relatively short, which means in most cases, it will not be detectable for long. When it comes to understanding how long crack cocaine remains in the system, first the individual needs to understand metabolism in general. Ultimately, no online guide can tell a person exactly how long crack cocaine will remain in their system after use because everyone’s metabolism is different. Some factors that can impact the metabolism of the drug include age, diet, intestinal flora, sex differences, enterohepatic circulation, and general individual variations as well as the dose taken, the frequency of use, and the method of administration. For example, a young, healthy person who used once because they wondered what does crack feel like will eliminate the drug faster than someone who is older, unhealthy and uses often.

Another consideration when it comes to testing is which test is run. Different tests will be able to detect the presence of the drug, its metabolites, and anhydroecgonine methyl ester (the key indications of the presence of crack cocaine) for longer than others. As such, users should think about the metabolism of crack in a general manner, understanding it may vary between individuals, and focus on the method of testing that is of most concern to them.

How Long Does Crack Stay in The Urine?

Perhaps the most common and well-known form of drug testing is the urine test. This tends to be the favored form of testing because it is easy to collect, non-invasive for the person being tested, and cheap for the person running the test. However, it is not the best method for detecting crack cocaine. According to a study, cocaine in any form will metabolize quickly and flood the system within minutes of use, making it detectable in a test almost immediately. The method of administration impacts the levels of the drug detected in the urine. Intravenous use caused the highest concentration, followed by intranasal use, and finally smoking. How long is crack detectable in urine? In most users, the levels of cocaine, its metabolites, and anhydroecgonine methyl ester will be below the limit of detection within 24 hours.

How Long Does Crack Stay in The Blood?

Blood-based drug tests are not as common as urine-based drug tests. However, they are often used when detecting the presence of drug use is crucial. This is often the case when it comes to medical treatment, including detoxing for rehabilitation, as well as establishing evidence for a court case.

How Long Does Crack Stay in The Hair?

We have all seen the social media stories where people shave all the hair off their body in preparation for a court case, preventing their hair from being tested. This is because we are often told that while urine, blood, and even saliva will not reveal use after a few days, a hair will hold the evidence permanently. Is hair crack testing really a thing?

Yes, it certainly is. In fact, hair testing has become a popular method of proving drug use in court cases, especially those involving the custody of children. And unlike other forms of drug testing, hair tests are more likely to detect the presence of the actual drug than its metabolites, making the test more reliable and better to stand up in a court of law.

How this works is that as the drug will enter the hair at the cuticle when the body metabolizes it; since hair is dead, the drug remains in the portion where the drug entered it. By analyzing strands of hair, laboratory technicians can determine not only if the person used a drug, but how frequently they used it and if they went through periods of avoiding drug use. This evidence is within the hair itself and cannot be washed away.

So, how long will hair reveal crack cocaine use? It will do so until the portion of hair containing the evidence is cut off or the strand of hair naturally falls out. This means that it will remain in the hair for several months to several years after use.

How Long Does Crack Stay in The Saliva?

Drug testing using saliva has increased in popularity in recent years because it is easy to collect, nearly impossible for the user to trick, and the tests are cheap to run. However, these tests have a lot of problems. For example, the user may not naturally produce enough saliva to collect a testable sample; while foods can be used to stimulate production, these may then alter the results of the test. The reliability of the tests also varies based on the method of collection. Ultimately, it does not detect the presence of crack cocaine any better than urine tests, with presence dipping below the detectable limit within 24 hours in most users.

Getting Crack Out of The System

The method used for getting crack cocaine out of the system will depend on the reason the user wants to remove all traces of the drug from their body. For example, if the person searching for a method is wondering how to get someone off crack cocaine, then what they are looking into is a true detox that removes the drug and side effects of crack. Because most crack cocaine users also use other drugs that can be dangerous to detox from at home, the detox from crack process should be handled by medical professionals in a rehabilitation facility.
If the user’s goal is not to truly detox and get off crack cocaine, or if they are looking to stop using the drug and are not using other drugs that can complicate the detox process, there are various ways they can handle how to get crack out of the urine and body as a whole.
Below are some tips to help.

While many people being tested for drug use are worried about how to pass a drug test after smoking crack, many people walk into their tests assuming that all will be well, either because it has theoretically been long enough since they used that the test should be negative, or because they honestly have not used at all. However, crack drug test and other drug tests can read positive when there does not seem to be a reason for this to happen.

The tests that most often result in false positives are at-home tests, often used by parents on their children to ensure that they are not using drugs. These are crack urine tests, and the results can be impacted by taking the test incorrectly, improper storage of the test or urine, food or drink consumed before the test, and prescription medications. For parents worried about use, it may be better to look for signs of use, including drug side effects and internet searches on topics like how to shoot crack.

However, there are occasions where laboratory results also come back with a false positive. Additionally, the second-hand crack smoke drug test may come up positive even though the person did not actively consume the drug.

If someone is looking to detox from crack cocaine, the best way to do so is at a rehabilitation facility. Call (888)-459-5511 to speak with our addiction specialists and find the right facility.

Addiction Resource » Addictive Substances: The Anatomy of Drug Addiction » Crack Addiction: Identifying Dependence and Getting Medical Help » How Long Crack Cocaine Remains in the Body After Use?