Celexa Interactions With Drugs And Other Substances

Patients frequently forget to consider Celexa interactions with other medications and substances. Taking citalopram 10mg for anxiety may seem like a casual daily ritual for some, although the consequences of its interaction with other drugs can be dire. To avoid experiencing setbacks in the treatment and various adverse health effects, it is crucial to learn what medications and foods can interact with Celexa.

Citalopram drug interactions can manifest in unexpected ways and make a patient need to stop the treatment or change the drug. Many people believe only strong prescription medications can interact with citalopram, although it’s not correct. This medicine can interact with many over-the-counter medications and foods. Therefore, researching such minor details as, for example, what cold medicines interact with Celexa is a reasonable idea.
Also, particular caution should be exercised when a person is taking Celexa during pregnancy, has liver problems, or suffers from other psychiatric and heart conditions. Such individuals may experience the effects of citalopram drug interactions more acutely than other patients. 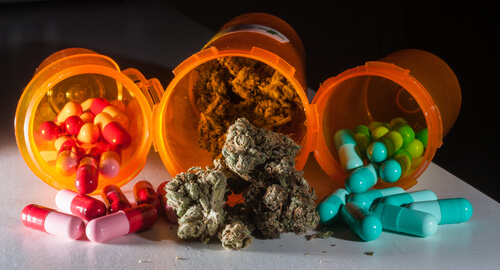 In some cases, antidepressants and cannabis are mixed unintentionally when a patient uses both for medical purposes. Most often, however, people combine citalopram and marijuana in an attempt to get high. Celexa is an SSRI, meaning it doesn’t directly contribute to the production of serotonin or dopamine. The way how Celexa makes people feel can vary from relaxation and improved mood to slight euphoria, but it’s almost impossible to get high off citalopram. Therefore, the drug’s low potential for abuse can lead a person to turn to marijuana. Cannabis doesn’t tend to interact with citalopram, as well as other SSRIs. However, THC is known to cause anxiety and depression in some cases, so if these conditions worsen, it is advisable to refrain from using marijuana for a certain amount of time to determine whether the medicine is working.

Celexa Interactions With Other Medications

Taking Wellbutrin with Celexa is associated with an increased risk of seizures. It is advised to avoid administering the combination of these two drugs to patients with a history of seizures, brain tumors, recent head trauma, and CNS infections. At the same time, citalopram treatment may yield better results in combination with Wellbutrin.

Trazodone has a propensity to prolong QT interval. The concomitant use of Celexa and Trazodone is not recommended for patients with bradycardia, hypokalemia, uncompensated heart failure, and recent acute myocardial infarction.

Taking Celexa and Xanax together might increase drowsiness, confusion, and sleepiness. However, there is no evidence of Xanax interacting with citalopram in any severely adverse way.

Citalopram and Ibuprofen should not be taken together. Ibuprofen is an anti-inflammatory painkiller that may increase the risk of bleeding, including upper gastrointestinal bleeding, in combination with Celexa, as well as reduce the effects of citalopram.

In general, Celexa and Adderall should not be taken together. Amphetamines interact with SSRIs and may cause stomach cramps, dry eyes, tremors, restlessness, and anxiety. There is also an increased risk of the development of serotonin syndrome. 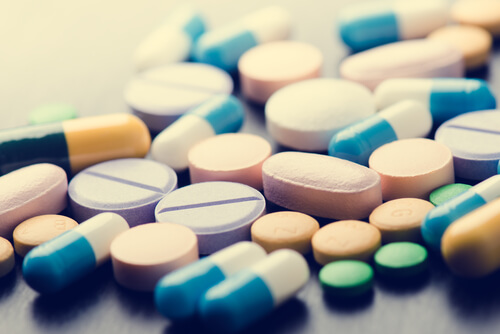 Benadryl can be taken along with citalopram. Patients should be aware of possible sleepiness and drowsiness, caused by Benadryl and amplified by the antidepressant.

The concomitant use of buspirone and Celexa should be avoided. It can lead to irritability, confusion, hallucinations, and tachycardia. There is also a risk of the development of potentially lethal serotonin syndrome.

Tramadol and citalopram present an incredibly dangerous combination. There is a high risk of the development of serotonin syndrome. Patients have also reported several cases of seizures while being treated with both of these drugs.

Citalopram and Tylenol should be used with extreme caution and only with a doctor’s approval. Tylenol was found to interact with SSRIs, similarly to ibuprofen, and decrease the effectiveness of citalopram.

Melatonin and citalopram don’t interact, so it is safe to take them at the same time. Melatonin is typically used as a natural medication to counter insomnia, as well as normalize immune function, blood pressure, and cortisol levels.

Citalopram and Omeprazole should be taken together carefully since Omeprazole tends to decrease the clearance of citalopram. It is also important not to exceed the daily dose of 20 mg because higher dosage might result in a heart condition, characterized by fast, chaotic heartbeats.

The combination of Seroquel and citalopram may lead to prolonged QT, increased risk of ventricular arrhythmias, and sudden death. The concomitant use of these drugs should be avoided if possible.

The effects of simultaneous Klonopin and citalopram treatment are known to be moderate. Certain depression of the central nervous system and the respiratory system might occur, particularly in elderly patients or those with associated conditions.

NyQuil is a popular flu medication, and many people ask whether it can be combined with antidepressants. Citalopram and NyQuil should be taken together with caution. In terms of potential danger, Celexa vs Prozac and any other SSRIs score equally, unlike antidepressants that don’t increase the level of serotonin in the body.

Lamictal is sometimes given along with citalopram. In many patients, this interaction helps with seizures, mania, and acute depression. 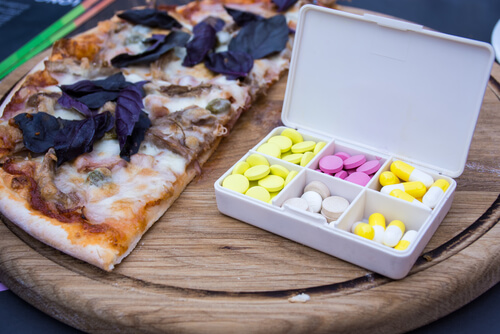 Insomnia is a common effect of citalopram interaction with foods and beverages of stimulant properties. So it is advised to avoid drinking coffee and eating chocolate, sugar, and other sweets as they might increase anxiety and shakiness.

Foods like pizza, chili, and hot wings may also be a poor choice since they upset the gastrointestinal tract. Citalopram interactions with spicy foods frequently include nausea, vomiting, and diarrhea, so it is recommended to exclude it from the diet. Besides, it can help counter weight gain on Celexa.

In addition, it is generally not recommended to take citalopram and alcohol. It can result in various negative health consequences, as well as Celexa overdose since these substances reinforce each other’s action.

Overall, Celexa can interact with a vast variety of both prescription and over-the-counter medications. The most dangerous consequences may occur when the drug is mixed with QT prolonging agents and nonsteroidal anti-inflammatory drugs (NSAIDs). Foods like coffee, sweets, chili, and pizza can also interact with citalopram. Considering the powerful action of the antidepressant, it is vital to consult with a doctor about adjusting a diet. Mixing citalopram can lead to overdose. That’s why it is critical to contact a professional drug facility right after the first signs are recognized. The medical staff will provide the most suitable treatment program.