Adderall Comedown: How to Cure the Stimulant Crash 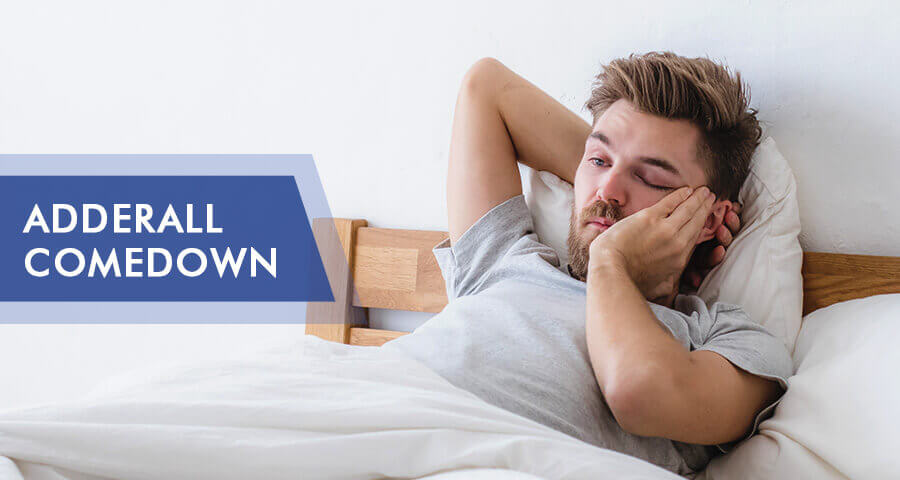 An Adderall crash or comedown occurs when the effects of the drug and the feelings of euphoria begin to subside. This is associated with a variety of unpleasant side effects. Being aware of the comedown and crash symptoms can help a user understand how to prevent and seek professional help for an addiction, which can involve getting off Adderall in some cases.

What is Adderall Crash?

Adderall’s effects begin to wear off after six or more hours , resulting in a crash/comedown which may cause people to experience feelings of anger, depression, sleeplessness, sluggishness, and dehydration. The price of Adderall is quite affordable and is relatively easy to obtain without a prescription. The drug is mainly prescribed for Attention Deficit Hyperactivity Disorder (ADHD), depression, and narcolepsy, but it is frequently used recreationally as well. It has become common for some students to take Adderall to aid in studying, hoping to improve their academic performance.
Recreational use of prescription medication is against the law. No one should be engaged in this activity.
This drug is often abused in combination with other substances, such as alcohol –commonly recognized as  the Adderall and alcohol high. Abuse can exacerbate symptoms of the comedown or crash. These severe symptoms may lead someone to increase their usage and seek alternative means for how to get a prescription for Adderall.

What is the Difference Between Adderall Comedown and Withdrawal?

The symptoms of Adderall comedown and withdrawal are similar to those of narcotics. However, the symptoms of a comedown or crash are more acute and include rage, irritability, cognitive distortion, and the feeling of being disconnected. Adderall and anxiety are inevitably intertwined, the latter being a dominant comedown symptom.
A comedown or crash may occur six hours after taking the drug, when it is still present in the body.
Unlike a crash or comedown, Adderall withdrawal starts to occur when the user (who may be addicted) abruptly stops taking it. It lasts much longer than a crash and depression, suicidal thoughts, feelings of exhaustion, and tremors are among its symptoms. When experiencing withdrawal, Adderall is no longer in the system, so it will not show up on a drug test.

What are the Adderall Crash Symptoms?

Because of its specific effects on the brain, a comedown or crash is typified by the following:

The stimulant causes increased release of the neurotransmitter dopamine, which accounts for the feelings of loneliness and sadness when the effects of the drug have subsided. This is a painful part of the comedown. In the case of Vyvanse versus Adderall, Vyvanse has slightly more moderate comedown symptoms, although the severity can vary from person to person.

How to Prevent Adderall Comedown?

A comedown or crash from this powerful stimulant is best prevented by taking it exactly as prescribed by a doctor. The method of administration also matters – for example, plugging Adderall XR is likely to increase the chances of a severe comedown. 30 mg Adderall is the maximum dose a day to prevent a comedown or crash. If a person suspects they’ve taken too much, they can find out easily by reading the most common Adderall overdose symptoms.

How to Cure the Adderall Crash?

There are ways of limiting the severity of comedown symptoms. Because Adderall functions as an appetite suppressant, eating light foods such as vegetable dishes and fruits is highly recommended, whereas foods high in fat and sugar are not.
L Tyrosine for Adderall comedown is recommended too as it supplements tyrosine in the evening. This can help remedy a crash by restoring depleted dopamine levels.. Another preventative method to minimize a comedown or crash could be Kratom, a tree found in some parts of Southeast Asia. It is thought; the leaves of Kratom can be indispensable due to their soothing, calming effect that will counteract the anxiety and irritability. However, it should be noted that Kratom itself is a powerful and habit-forming substance, which could replace one addiction with another. It is not recommended to take any medications or substances without a consultation with a prescribing physician.
Drinking a lot of water or tea with chamomile and taking supplements such as magnesium and Vitamin C, act as antioxidants and help speed up the recovery process.

If one is struggling with frequent crashes and comedowns, it may be best to stop taking it. However, going cold turkey can lead to negative effects such as withdrawal, which can be worse than a crash in some respects, so it’s important to stop taking it gradually and under medical supervision.
After experiencing a crash, it’s a good idea to research and find out which substance abuse treatment program would be best. Outpatient programs are a great choice for those who want to keep going to school or work as they wean off the substance..
Generally, one can expect their mood and overall condition to improve within 6 weeks of stopping the drug.