There are many reasons to cut down on the intake of alcoholic drinks or quit drinking altogether. For some people, the motivation is health reasons. For others, it is financial concerns or a personal resolution. Nonetheless, when someone decides to quit drinking, there are many physical and mental challenges. What to expect when quitting alcoholic beverages? And how long does it take to withdraw from alcohol? This is a guide through the process of detoxification for people battling an addiction to alcoholic drinks. It is designed to provide a better understanding of how to ease withdrawal symptoms.

Alcohol and the Human Body: What Causes Withdrawal Symptoms? 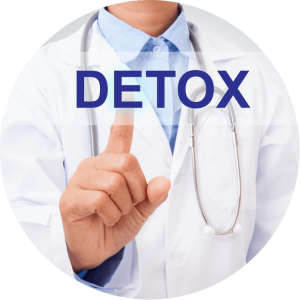 The National Institute on Drug Abuse defines detox for alcohol abuse as a medically-supervised procedure where doctors manage and treat the physical symptoms of detoxing off alcohol. In fact, this is the first step in addiction treatment.
Alcohol acts as a depressant in the human body. In other words, it slows down the systems. It affects brain function. With consistent drinking over time, the central nervous system gets used to exposure to alcoholic drinks. The body overcompensates to maintain nerve communication and brain alertness. But what happens when we take alcohol out of this equation? The body cannot instantaneously revert to its original healthy state, and this is what causes withdrawal symptoms when at the beginning of a detox program.
Chronic drinking changes the brain chemistry by:

When someone abruptly stops drinking, these neurotransmitters in the brain begin working feverishly. They exhibit a rebound effect and go into overdrive. 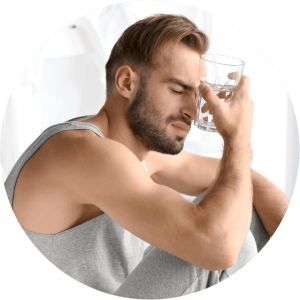 Like any drug, the effect that alcohol has on different people varies, and so do the withdrawal symptoms. The first question on a recovering alcoholic’s mind is probably, how bad will the alcohol withdrawal be? As a general rule, the longer and heavier a person has been drinking, the more severe and prolonged the symptoms of withdrawal are.
When do alcohol withdrawals start? The first mild symptoms may start as early as 6 hours after the last drink and may include:

The second wave of symptoms, which may be slightly more severe, include:

What to expect when detoxing from alcohol if someone has been a heavy drinker? The severest symptoms occur in long-term abusers and include:

In addition, there is a separate class of symptoms known as delirium tremens, commonly referred to as DTs or “the shakes.” This affects only about 5 percent of people going through detoxification. How long do the shakes from alcohol withdrawal last? They can start anywhere between 48 and 72 hours after the last drink. Symptoms of DT include:

The ultimate goal of any detoxification programs is to return the affected person to a healthy state in a safe manner. The goals of treatment during withdrawal from alcoholic drinks are:

Detox Duration: How Many Days to Detox from Alcohol?

Perhaps the biggest question on a recovering alcohol abuser’s mind is how long does it take to go through alcohol withdrawal? This depends on a number of factors:

Withdrawal symptoms are usually the most severe when a person has been drinking for a long time or has been a heavy drinker. The more severe the symptoms, the more prolonged the alcohol detox treatment.
How long before alcohol withdrawal starts? The first symptoms typically manifest about 8 hours after the last drink. Initial symptoms are usually mild and consist of anxiety, insomnia, nausea, vomiting, mood swings, loss of appetite, and fatigue. Over the next 24-72 hours, these symptoms intensify. Moderately intense symptoms such as increased blood pressure, increased body temperature, irregular heartbeat, and mental confusion may manifest during this time. This is a critical period before more severe symptoms such as hallucinations, tremors, agitation, seizures, and DTs occur.
How many days does it take to detox from alcohol? In most cases, it takes around 5-14 days to stabilize the person and control symptoms of withdrawal, provided there are no complications. The presence of coexisting physiological and/or mental disorders can complicate the detox process and prolong it.

Detox Programs: What to Expect From Alcohol Withdrawal?

According to the National Center for Biotechnology Information, an alcohol detox program consists of medications, psychosocial support, or a combination of the two.

Is it possible to suffer no alcohol withdrawal symptoms? If a person has been a heavy drinker, the answer is no, but certain medicines are prescribed to ease withdrawal from alcoholic drinks:

The medications listed above should be prescribed by a doctor. Do not attempt to self-medicate during the alcohol withdrawal, as it may cause severe adverse reactions, especially in case of some drug interactions.

Many facilities provide integrated alcohol detox programs where a combination of medications and psychotherapy help a person overcome the withdrawal symptoms and prepare to stay off alcoholic drinks after completing the treatment. During psychotherapy, a person’s mind is recalibrated and they are taught to: