Alcohol Abuse: The Worrying Facts And Statistics One Needs To Know 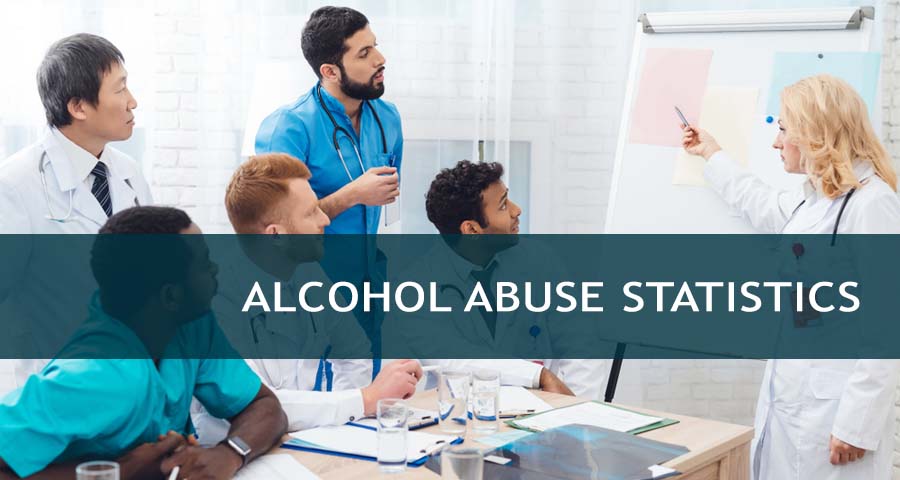 Alcoholism is an illness in which a person is compelled to go on drinking in spite of negative consequences up to and including chronic illness or death. There are about 88,000 drinking-related deaths every year in the U.S. Those who die from excessive alcohol use have their lives cut short by an average of 30 years. The economic burden of alcohol abuse was $249 billion in the year 2010.
Drinking statistics leave no doubt that alcoholism is a deadly illness. Awareness of how damaging alcohol can be to the body and health is the key to change the behavior before it’s too late.

Statistics regarding the use and abuse of alcohol leave no doubt that alcohol is ruining a lot of lives all over the U.S. and around the world. Here are the numbers in greater detail.
Social drinking is acceptable in the U.S., and in many settings, it’s even expected. Drinking with dinner or at a sporting event for many is considered a well-earned privilege of being an adult. Of course, not all who drink an occasional glass of whiskey or take a shot of tequila, go on to become physically or psychologically dependent on alcohol. However, many others do cross the line between social drinking and becoming chemically dependent on alcohol.
According to the NIAAA, the following is information on alcohol abuse in the U.S.: 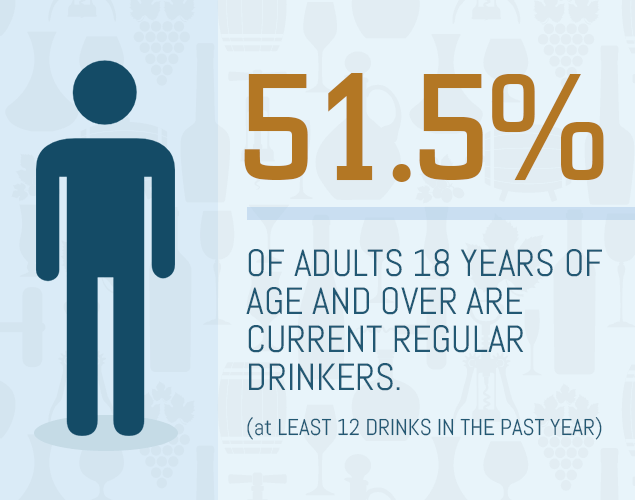 According to the Centers for Disease Control and Prevention (CDC), binge drinking is the most rampant form of excessive alcohol use. Binge drinkers may not drink every day, but they often consume about eight drinks in one sitting, which can be very dangerous.
Drinking a large amount in a short period increases the risk of fatal consequences. Consider these binge drinking statistics from 2014:

When problem drinking starts to spiral out of control, it is known as an Alcohol Use Disorder, which can lead to addiction if not treated early. A person with this condition will feel a strong urge to drink alcohol or to keep drinking once they start.

How Common Is An Alcohol Use Disorder?

According to U.S. government records for 2014, 8% of people aged 18 years and older suffer from an Alcohol Use Disorder (AUD), and more commonly, men than women. 7% of people aged between 12 and 17 years experience AUD.
Alcohol Use Disorder indicates that the person is dependent on drinking and feels compelled to turn to alcohol compulsively.
AUD can progress to addiction if it is not treated promptly. According to U.S. government records for 2014, AUD is prevalent among both youths and adults:

Some more facts about alcoholism:

What Are The Dangers Of Alcoholism?

According to alcohol poisoning statistics, in the U.S., six people die every day from alcohol poisoning. This occurs when a person drinks a large amount of alcohol during a very short period (also known as binge drinking). Symptoms include shallow breathing, low heart rate, and low body temperature, and this may ultimately be fatal.
One of the leading causes of traffic accidents is driving under the influence of alcohol (DUI). Drinking can lower reaction time and coordination as well as slowing cognitive processes. A driver who is intoxicated cannot see or hear well and may feel sleepy and tired. Only one or two drinks can be enough to impair driving ability and endanger the lives of innocent people.
Drinking-Related Deaths
Long term abuse of alcohol can lead to many health problems and, ultimately, death. Some health problems caused by alcohol abuse include: 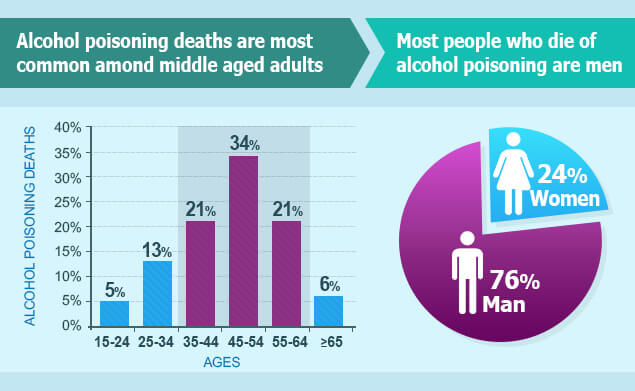 How Common Are Drinking-Related Deaths?

Deaths caused by alcohol are most common among middle-aged adults, aging 35-64 years old. 76% of those affected are men, and 24% are women. About 88,000 people die every year in the U.S. from drinking-related causes.
Alcohol abuse damages almost all the organs of the body and causes various medical complications and diseases. If it continues and the disorders are not treated, the consequences can be fatal.
Besides these physiological side effects, this addiction also impairs brain function. People are known to cause accidents or get involved in violence under the influence of alcohol.
The following numbers prove that alcohol can be deadly: 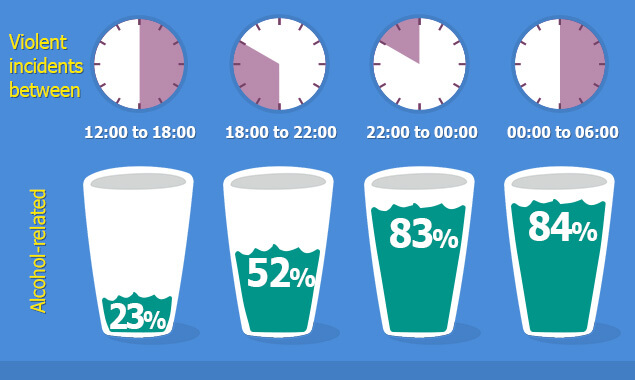 Abusing alcohol can cause damage to both the body and the mind. When a person drinks habitually, they lose control over their impulses, cognitive faculties, and reflexes. The result is an increase in the number of violent incidents.

The social and economic burden of abusing adult beverages ranges from loss of productive capacity to being unable to have a happy or stable family life.
The following are some heartbreaking statistics:

Alcoholism statistics are proof that continuing to drink to excess can lead to irreversible consequences. These statistics reinforce the need for spreading awareness both amongst those who use alcohol and those who live with people who do.