Smartphone Addiction Signs and Symptoms – Is One A Nomophobe? 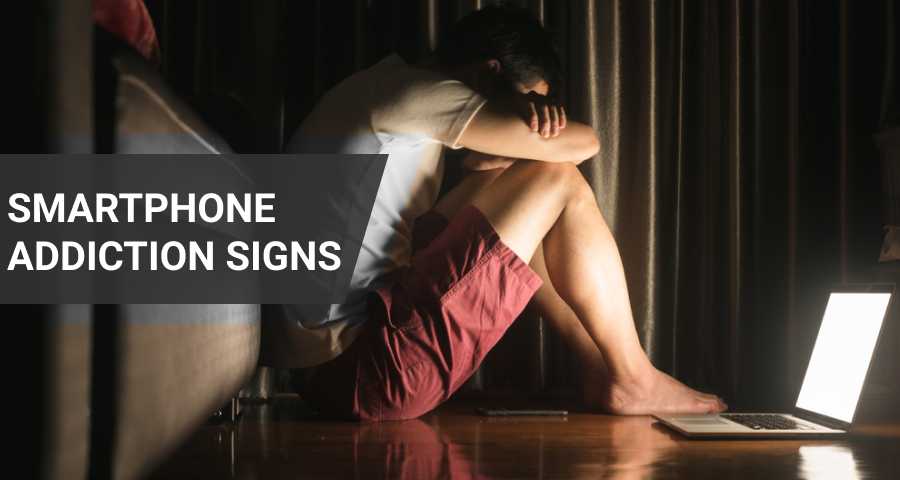 What is Smartphone Addiction and how is it Diagnosed?

In America, 90% of adults and 75% of 12-17 year-olds own a cell phone. The number of youth using cell phones has gone up drastically since 2004, when it was a mere 44%, whereas the adults’ use has held a steady incline. With the integration of the online world into our lives via smartphones, new pathologies are developing every day.
One such pathology is “Nomophobia”, an irrational fear of being separated from your phone, running out of battery or data, and having no service. In short- no mobile phobia. Smartphone addiction signs also can suggest additional behavioral problems and disorders, such as online gambling, shopping, virtual sex addiction. Currently, the DSM-5 has only recognized compulsive gambling as a behavioral addiction, considering the rest of these types of abuse as impulse disorders.

A study done in New York City by Basch, C.H., Ethan, D., Zybert, P. et al. found that of those crossing busy intersection on the “Don’t Walk” signal, 42% was using a smartphone at the time- talking, wearing headphones or looking at the screen. This kind of behavior has influenced the tenfold increase in injuries related to phone use from 2005 to 2010 and is still on the rise.
Smartphone addiction symptoms can be physical and psychological. Because of its effect on all organs, symptoms can manifest in different systems.

Auditory and tactile illusions: the sensation of having heard a ring or felt a vibration of a cell phone.

A brain imaging study of 19-year-old smartphone or internet addicts showed significantly higher levels of the neurotransmitter GABA than glutamate-glutamine. This meant that there was more of the neurotransmitter that inhibits neurons, than one energizing them. GABA is responsible, among other things, for motor control and vision. Therefore, with such high levels of it, these functions are slowed, resulting in poorer focus and attention. This is a big factor in the number of accidents related to smartphones.

Is One A Smartphone Addict?

A study on smartphone addiction and nomophobia done by Caglar Yildirim and Ana-PaulaCorreia resulted in the development of a twenty question quiz. The first phase of this development involved “a qualitative exploration of nomophobia through semi-structured interviews conducted with nine undergraduate students”. This enabled them to define four dimensions of nomophobia: not being able to communicate, losing connectedness, not being able to access information and giving up convenience. After this, the NMP-Q (nomophobia questionnaire) was created. It was then tested on over 300 university students, resulting in proof of its effectiveness for nomophobia detection.
To find out how you rank on the scale of not addicted to nomophobic, take a moment to fill out the NMP-Q below.

Rate each item on a scale of 1 (“completely disagree”) to 7 (“strongly agree”), then calculate the result and check point table.

If I did not have my smartphone with me …

If your score suggests that you are suffering from nomophobia, It might be time for a serious intervention. To find out more about technology addiction and how to fight it, call now.