How Does Wellbutrin Work And How Long It Stays In Your System?

Wellbutrin is under the generic name Bupropion and its primary use is for the treatment of major depressive disorders. In 2019, around 5.5 million patients in the United States used Bupropion. With these statistics, it is a must for every individual to understand what this drug does to the body and how long it stays in the system. Wellbutrin half-life is relatively long because of its active agent, Bupropion. Moreover, it is vital to know the length of time Bupropion stays in the system to avoid overdose on Wellbutrin and other unwanted effects on health, such as for instance hair loss because of Bupropion. Since Bupropion shows up on a drug test, knowing its half-life and time of staying in the urine, blood, and saliva is essential. In this article, information about Wellbutrin half-life, mechanism of action, signs Wellbutrin is working, Wellbutrin and drug test, how long does Wellbutrin stay in your system and factors that affect this period, and how to safely remove it from the system will be provided.

How Does Wellbutrin Work?

Bupropion is one of the norepinephrine-dopamine reuptake inhibitor drugs (NDRIs). So, how does Wellbutrin work? According to a study of medical doctors from the United States regarding the pharmacology and therapeutic applications of Bupropion, Wellbutrin mechanism of action is known for inhibiting the reuptake of the neurotransmitters dopamine and norepinephrine. It works by binding with the norepinephrine transporter (NET) and dopamine transporter (DAT). These neurotransmitters help in regulating sleep, mood, pleasure, memory retrieval, arousal, and restlessness. When these neurotransmitters are decreased, this results in depression, seasonal affective disorder (SAD), and other depressive disorders.

When Bupropion inhibits the reuptake of the neurotransmitters dopamine and norepinephrine, this will result in a longer duration for them to act in the brain. This helps in reversing the effects of mental health conditions such as depression. Unlike the Selective Serotonin Reuptake Inhibitors (SSRIs) mechanism of action, when using this drug, serotonin reuptake is not inhibited. This results in much fewer sexual side effects of Bupropion, which are typical when a patient is taking SSRIs, but problems with weight gain or loss may still be present.

How Long Does It Take For Wellbutrin To Work?

Bupropion is a type of medicine that does not start working immediately as well as the majority of other antidepressant drugs. For those who are wondering, how long does it take for Wellbutrin to work? The answer is this medication has a slow-acting mechanism of action which may take approximately 2 weeks for users to start feeling its effects, according to the study of medical doctors in the United States. After that, it can take up to 4 to 6 weeks to experience its impact on a patient’s body.

Moreover, in the same study, the onset of action of this drug varies from its dosage forms:

Take note that the time it takes for this drug to start working depends on the dosage and frequency for which it is being taken. According to medical doctors from Oklahoma, the higher the dose taken could result in a faster onset of action.

If a patient is new to a class of medication, there are lots of questions about its effectiveness. Is it working? Is the patient showing signs of health improvement? Is a certain effect a sign of effectiveness or not? One of the first signs Wellbutrin is working is when the depressive symptoms become less. This means that the patient’s sleep and eating habits are improved, there are positive changes in the energy levels of the patient, and there is decreased irritability and improved mood.

Another use of this drug is as a smoking cessation aid. Patients using this drug for quitting tobacco use may say that the drug is working for them when they crave less for tobacco use. According to medical doctors from the United Kingdom, one in every five individuals is able to stop his or her tobacco usage for more than a year, without relapse, after using Bupropion.

Wellbutrin half-life is the length of time it takes for this medication to remain effectively present within the plasma before reaching 50%. There are three reported active metabolites of Bupropion in the human plasma. They are the following: 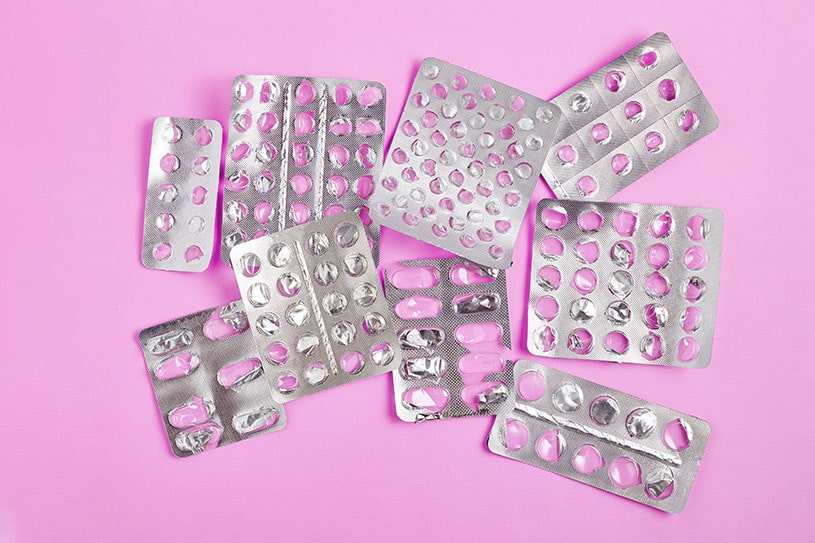 How Long Does Wellbutrin Stay In Your System

Knowing how long Bupropion stays in the system is necessary because, in this way, the patient will be able to understand how it will work inside the body, and how long it will take to wait for possible side effects of Wellbutrin XL to stop. Additionally, take note that personal factors affect how long a certain drug stays in the body.

The primary metabolite of Bupropion in the urine is a glycine conjugate of meta-chlorobenzoic acid. Studies showed that more than 60% of Bupropion would be excreted and found in urine within the first 24 hours, while a total of about 90% will have been passed via urine by the fourth day. It means that if there is a suspected case of Wellbutrin abuse, it could still be detected by urine drug test in as much as four days after the last dose.

Scientists discovered that Bupropion can still be found in the blood after 4.4 days of the last Bupropion dosage. The blood test isn’t done usually to look for Bupropion in one’s system. It is rather be done in case of emergency or overdose on the medication to know its quantity in the system at the moment.

Saliva drug tests are not usually done for this medication. The period when Bupropion could be found in the saliva showed a significant correlation with that of urine and plasma, so, the time for it to stay in the saliva is around 4.4 days as well. Also, the concentration of Bupropion was found to be higher in urine and saliva compared to plasma.

It is preferably safer to stop Bupropion, like any other medication, for about three months before going for any drug screening, as any substance one takes may remain in hair cells for up to 90 days. The standard hair drug testing offers up to a 90-day window for drug detection. 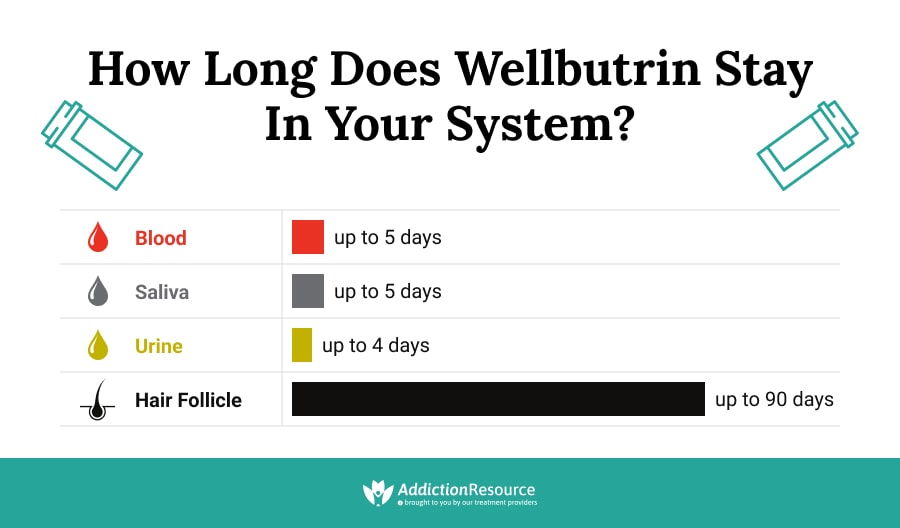 Take note that Bupropion can still be found during a routine drug test even if the intake of this drug was stopped some days before the test. The challenge is, when such individuals make an effort to stop using the medication that may be due to an upcoming drug screening, Bupropion withdrawal symptoms will start making life quite miserable. So, what are the drug panel tests where Bupropion can be screened? In this section, information about what panel drug tests Bupropion might become positive will be provided.

Can Bupropion Cause False-Positive?

According to the study of medical professionals from Washington University School of Medicine, out of 10,011 participants in the study, 234 of these tested positive for amphetamines. Moreover, 1.3% of this population have used Bupropion alone and not an actual amphetamine drug. This implies that there is a possibility for this drug to cause a false positive on a drug test. Additionally, this is one of the few antidepressant drugs that trigger such occurrences on routine screening. It is advised to always notify the personnel about Bupropion use if one is going to be tested for amphetamines.

Factors Affecting How Long Wellbutrin Stays In The System

Several factors have an impact on the length of time this drug stays in the system, such as pre-existing health conditions like liver impairment, renal diseases, and major depressive disorder. Moreover, interactions with other drugs and hydroxyl radical reactions are also considered as factors:

Take note that aside from drug-drug interactions, food-drug interactions may also affect how long Wellbutrin stays in the system. For example, taking alcohol and Wellbutrin together may increase the concentration of the former. When this happens, Bupropion will stay longer in the system. For this reason, this drug must be avoided in those patients with alcohol use disorder. Also when alcohol is consumed with this drug, there might be an increased risk of seizures. 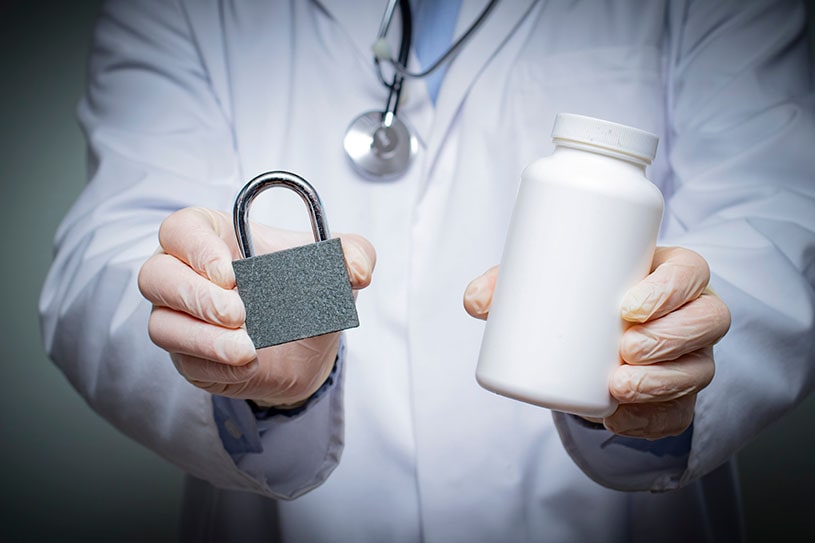 How To Get Wellbutrin Out Of The System Safely?

Removing Wellbutrin from the system usually starts with tapering the dose. Moreover, to safely get the proper dose tapering technique and instruction, a tapering schedule developed by addiction treatment professionals is recommended. Aside from this, detoxification procedures will also help a patient to avoid severe withdrawal symptoms.

Furthermore, as the Wellbutrin mechanism of action makes changes in the level of dopamine in the brain and causes stimulant-like effects, it has the potential of being abused, especially when it is taken with alcohol. So some patients may search for the possible alternatives to the drug, like ​​Zyban vs Wellbutrin. Wellbutrin is usually taken for an extended period, and during this period, psychological dependency on the drug may also develop, as well as some adverse reactions in the body like Wellbutrin weight gain or loss. Abuse and dependence can lead to serious side effects and affect the lives of the patients. In the case of abuse, a patient should look for an addiction treatment facility to manage this condition.