Some side effects of Wellbutrin xl associated with other types of this particular antidepressant medication are more common than others. The most common adverse reactions related to Wellbutrin are usually considered not significantly harmful. Some people may find that these side-effects go away as their body starts to get used to Bupropion, as it happens with Bupropion and hair loss, for instance. Below is a list of common Wellbutrin side effects that patients are advised to be aware of when they are planning to start using this drug to assist in the treatment of their depression symptoms.

Physical Side Effects Of Wellbutrin

Bupropion is mainly prescribed as an antidepressant. As one starts using Bupropion, one may notice some unwanted reactions on physical and mental health. These physical adverse reactions are not dangerous and they usually go away once the body is used to having a certain amount of Wellbutrin in the system. It primarily affects the gastrointestinal system and nervous system. The most common physical side reactions being GIT distress, headache, and migraine. Some of the general physical side effects of Wellbutrin xl are:

However, it is worth noticing that Bupropion is only prescribed if advantages weigh over the undesired reactions or disorders. In case of any of these side effects, one should consult a doctor or medical professional before quitting medicine or changing recommended doses, or search for alternatives to the drug, such as for example Wellbutrin vs Adderall. Although these are the most common side effects of Wellbutrin, these are not all. There are some other systemic symptoms that are correlated with its use.

Gastrointestinal side effects are the most common effect seen with Bupropion. It is concentrated in saliva, this is why it severely causes dry mouth which can be uncomfortable and increase thirst. It can also alter taste sensation owing to its strong metallic aftertaste which can remain for some time. Patients taking Bupropion have also reported git disorders like constipation and decreased appetite.

As Wellbutrin interacts with dopamine receptors, it is very likely to cause central nervous system side effects. These adverse reactions can be related to the central or peripheral nervous system. These are rarely dangerous but can affect the everyday functionality of individuals. These can include conditions like insomnia, agitation, dizziness, shaking, restlessness, tremors, and fainting spells.

Another potential side effect of Wellbutrin SR is that many people tend to notice changes in their weight while they are using Bupropion. This particular adverse effect does not affect everyone in the same way. Bupropion weight loss occurs in some people who use the drug. In some people, however, adverse reactions may rather cause the person to experience Bupropion weight gain instead. Weight gain of roughly 5-10 pounds is found in 15% of the patients. This weight fluctuation can be easily managed by counseling and regular exercise. It does not increase any comorbidities chances.

Certain adverse reactions may occur relating to a patient’s sexual health and performance. For example, in some people, Wellbutrin hypersexuality side effects can occur. This may cause the person to experience an increase in their libido. It is, however, possible for an individual to experience a loss of their sex drive while they are using antidepressants, especially during the early stages. Loss of libido is temporary and usually goes away within 2-3 weeks of using the drug.

The psychological effects of Wellbutrin can be dangerous if not handled correctly. It can also cause exacerbation of already present psychological symptoms in predisposed patients along with new symptoms in patients with no previous psychiatric history. They can be anywhere from conditions like delusions, hallucinations, manic depressive episodes, suicidal thoughts, changes in behavior to mood changes. These psychological effects can be attributed to an altered level of dopamine in the brain which can affect neuronal firing.  Less severe psychological Wellbutrin side effects are anxiety, restlessness, trouble concentrating, and insomnia.

Even though Bupropion has been developed to assist with depression, some people have noted Wellbutrin anxiety side effects. For those asking if Wellbutrin causes anxiety disorder, it is important to note that some individuals have pointed out changes in their mood and other mental-related factors. Individuals with existing anxiety may sometimes find that their symptoms are elevated. This may happen due to Wellbutrin interactions; thus taking a closer look at other types of medication that are also being used can be a way of possibly pinning down the cause.

In some cases, anxiety and related mental symptoms may also be a symptom of Bupropion withdrawal signs and symptoms, if the patient recently decided to stop using the medication after they relied on it for an extended period.

Wellbutrin insomnia is another potential adverse reaction that a lot of people experience when they use the drug. While it does seem to get better after a while. It takes approximately 2-3 weeks for the body to get adjusted to Bupropion. Insomnia is mainly due to the stimulatory effect of the drug on the central nervous system.  As the body gets acclimated to the level of drug in one’s system, these symptoms get better. Some patients also reported experiencing sleep loss during the initial period when the use of the drugs is only initiated. It can be particularly uncomfortable for the patient and some people opt for a medication change. The point worth noting is that medication change or any dose alteration should always be consulted with a doctor or medical practitioner. 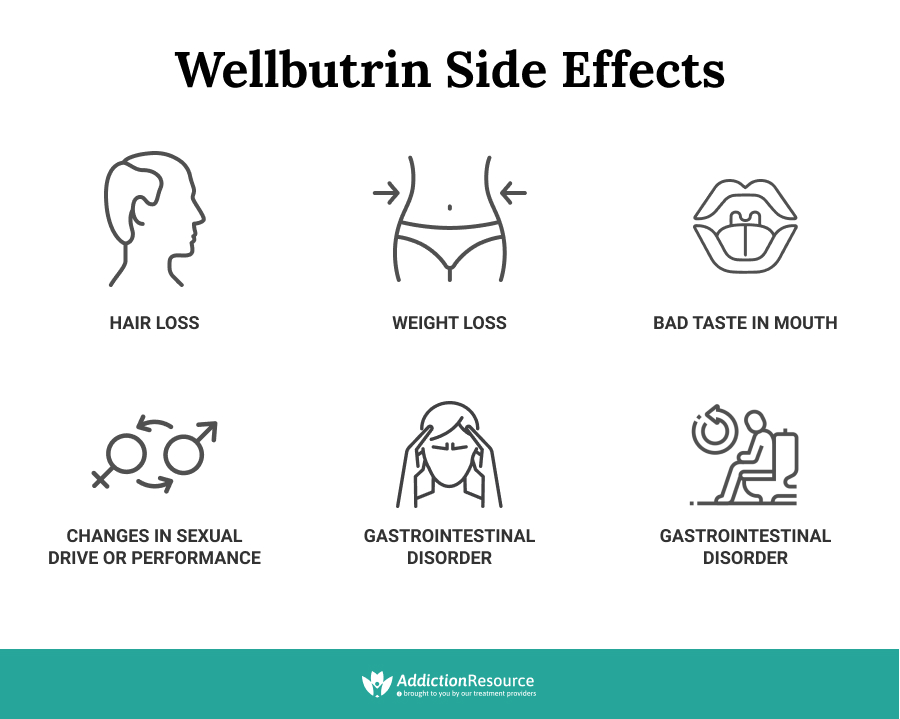 Severe Side Effects Of Wellbutrin

As part of this guide on Wellbutrin XL side effects, it is important also to consider the fact that in some cases, more serious adverse reactions may occur. The chances of someone having these severe side effects depend on the individual patient, their metabolism, age, previous medical conditions, and any idiosyncrasy due to drug interactions.  In these cases, it is usually advised that the patient contacts their doctor or visits an emergency room for medical assistance without wasting time. Although these dangers to health are extremely uncommon and happen in less than 5% of patients taking Bupropion still, having information about these effects is necessary to make an informed emergency decision. Some of the serious side effects of Wellbutrin are mentioned below.

Virtually all antidepressants have some seizure risk. Whether using Wellbutrin for ADHD or depression, the seizure disorder is a dose dependent possibility that does affect some people. It is not a common clinical issue with doses less than 400mg. At high doses, it can cause a severe and life-threatening reaction that may result in overdose on Bupropion.  This is why Bupropion should be kept under 350-400mg until further information about its side effects on the patient can be gathered.  While rare, this is a severe Wellbutrin side-effect, and the person would usually be advised to stop using the medication if this type of event occurs. As Bupropion may cause seizures, individuals who have experienced a seizure in the past should consider an alternative to the drug.

Wellbutrin can cause blurry vision, doubled vision, or image distortion due to its dopaminergic and nor-epinephrine effect.  When Bupropion starts affecting the vision of the patient, then it is also considered a serious complication of the medication. In most cases, visual disturbances and vision change is a temporary condition and resolve on their own when the patient is taken off medicine but can cause permanent vision distortion if not addressed on time. These vision changes such as sudden blurry vision should be reported to the prescribing physician to ensure appropriate action can be taken.

There are certain Wellbutrin XL side effects that may affect the cardiovascular system as well. Wellbutrin blood pressure effects may be noted, for example. There may be an increase in the person’s blood pressure levels, palpitations, tachycardia,  irregular heartbeat, chest pains, and panic attacks are common cardiovascular side effects. When heart palpitations or irregular heartbeats are experienced, however, it is generally advised that the patient discusses this particular adverse event with their doctor.

Wellbutrin During Pregnancy and Breastfeeding

The relation between Wellbutrin and pregnancy is still under debate. The Wellbutrin pregnancy category has been defined as Category C by the FDA. Category C means that there are no controlled studies in humans for this drug and no direct studies regarding Wellbutrin and pregnancy. The only studies for this drug have been carried out on animals, and those studies showed some adverse effects on the fetus for reproducing animals. However, category C also means that a doctor may prescribe a medicine to be used by pregnant women if the potential benefits outnumber the potential risks.

According to various studies carried out on Wellbutrin and breastfeeding, it is shown that Bupropion is excreted in breast milk in small amounts. The amount passed on to the infant is quite small, which may not be harmful. However, there were reports of one baby experiencing seizures after he was exposed to Bupropion through breast milk. Hence, Bupropion should only be taken during breastfeeding upon the advice of a competent doctor who thinks that the potential benefits of the medicine are much higher as compared to the potential risks in that particular patient. 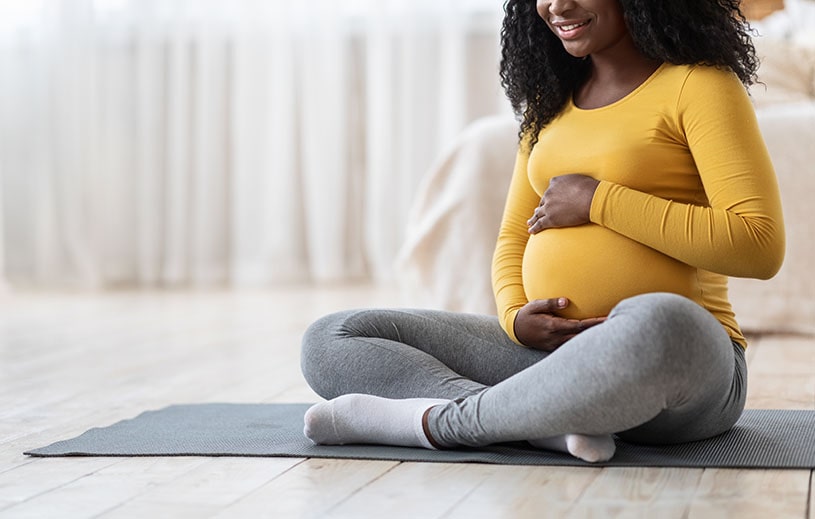 Bupropion is a safe drug usually used as an antidepressant. It has shown promising results in patients with depressive syndromes. In some cases, the patient may feel some minor side effects such as insomnia, constipation, and dry mouth. These symptoms take almost 4-5 weeks to resolve on their own if one continues taking medication and needs no further management. Some of the severe side effects of Wellbutrin such as seizures, hallucinations, and vision disturbances need medical assistance.

Wellbutrin and alcohol interactions need to be understood by individuals using the drug. When alcohol is used with the medication, then severe Wellbutrin side effects are more likely to occur. Limiting or eliminating alcohol is always a good idea. Furthermore, when using this particular medication, a person should ensure they are not taking other pills that may have interaction, as this can also lead to an increased risk of Wellbutrin side effects.

While anyone can experience side effects while on the drug, those who are at the most considerable risk are the individuals who abuse Bupropion and take more than is recommended dose. It has the potential for physical and psychological dependence. Anyone who is taking Bupropion recreationally, for a long time, or at higher doses than prescribed needs help to get clean. By contacting a drug and alcohol rehab center, those abusing the medication can get off it and live a better life.