Wellbutrin Sexual Side Effects: Does The Drug Increase Libido?

Wellbutrin, also known as Bupropion, is a commonly prescribed antidepressant that has a few distinguishing features from other antidepressants. Bupropion is, unlike other antidepressants, a norepinephrine–dopamine reuptake inhibitor, which means that it increases the levels of neurotransmitters like norepinephrine and dopamine. Does Wellbutrin cause weight gain? Other antidepressants like SSRI (selective serotonin reuptake inhibitors) increase serotonin levels, which can have adverse effects like weight gain and a decrease in libido. Users do not share those adverse effects of Wellbutrin. Some studies have even suggested that adverse reactions can include appetite supression and an increase in a patient’s sex drive.

This article will explore whether those claims have any validity to them and what other scientific studies suggest.

Wellbutrin Sex Drive Effects: What Is The Mechanism of Action?

The mechanism of action for antidepressants like fluoxetine (Prozac) and sertraline (Zoloft) is based on serotonin. Those drugs target serotonin levels in the brain and gradually try to increase their levels by preventing them from being absorbed by other chemical receivers. Generally, SSRI have been successful in treating symptoms of mild and severe depressive disorders, although weight gain (or weight loss) and a drop in libido may be induced by these types of drugs.

The mechanism of action of Bupropion is different from an SSRI. Bupropion is a norepinephrine-dopamine reuptake inhibitor (NDRI) that increases the levels of dopamine and norepinephrine, which are the chemicals that “reward” the pleasure centers of the brain after activities like eating and sex.

But the question of whether Buprioprion does lead to an increase sex drive is still unanswered. Several studies that pointed to a relationship between Wellbutrin and an increase in libido have been retracted, while other studies have pointed to the opposite: a decrease in sexual activity and arousability after starting Bupropion. 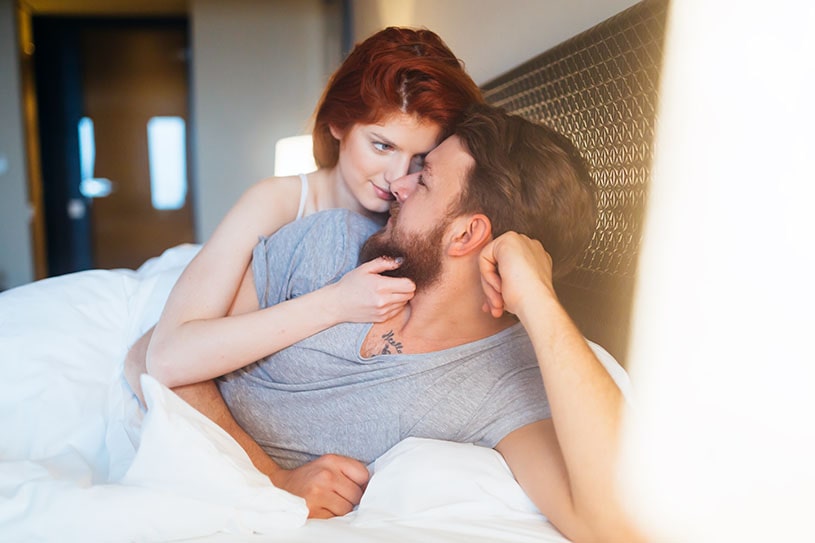 Does Wellbutrin Have Any Sexual Side Effects?

Data obtained from the CDC has shown that nothing less than 50 million people across the U.S. are struggling from one form of mental health disorders such as Major depressive disorder. MDD has been connected with sexual problems, such as low libido and erectile dysfunction, and Bupropion is commonly used to treat Major depressive disorder. Most antidepressants are known for lowering patients libido. Fortunately, Bupropion is not one of them. All of its formulations are standing among the safest antidepressants almost without potential side effects, even though this medicine may cause some other adverse effects like Bupropion hair loss. But are there completely none of sexual adverse reactions to the drug?

Wellbutrin And Sexual Side Effects In Men

Some of the Positive Effects Include:

While the Negative Sexual Effects That Accompany Bupropion Include:

One study reported that male rats who were injected with 7.5 and 15 mg of Wellbutrin did not experience any difficulties in either maintaining an erection or in reaching climax when stimulated.

The same study also found that there was no notable increase in sex drive among those subjects that received the higher dose of Bupropion. However, prolonged usage of the drug was found to have the drug induced effect on the ejaculatory response of certain rats, meaning it became more difficult for them to climax, but the effect was short-term. Furthermore, drinking alcohol while on Wellbutrin may also induce some unwanted reactions in patients.

Wellbutrin And Sexual Side Effects In Women

The potential sexual side effects of Wellbutrin in women can range from mild to non-existent, according to several studies. One study found that women who took SSRI-based antidepressants were 82% more likely to experience some type of sexual dysfunction, such as:

Compared to only 2% of women who reported the same taking Bupropion. However, one interesting finding from the same study found that women who left their depression untreated experienced the most sexual dysfunction. The study also noted that women who took any type of antidepressants were more likely to experience a sign of increase in sex drive rather than women who did not take any medication.

One of Bupropion benefits for a good sexual experience is the release of dopamine. This also helps in relieving stress. Recent scientific evidence revealed Bupropion was observed to have restored normal sexual functioning in about 70% of the research population. Both men and women were included in the research, as well as young and older adults, from 18 years to 80 years old. The results show that this medication is suitable for both genders and all ages. Conclusively, there were no Wellbutrin sexual side effects found by this research.

Other anecdotal studies have reported women experiencing an increase in sex drive after being prescribed Wellbutrin. This is, again, due to the raising of dopamine levels in the brain that stimulate the pleasure centers in the brain. This effect even occurs in older, post-menopausal women who have an overall decrease in libido. However, the increase in sexual desire in women could also be ascribed to the treatment of their depression and not necessarily an effect of the drug itself.

These effects are not as readily reported by men taking Bupropion. As the above study in sexual arousal in rats found, the drug had no effect (positive or negative) on male sexual performance. Other studies have found that male subjects experienced no sign of loss of sexual function (whether it was frequency of erection or inability to climax) when treated with Wellbutrin.

HSDD is commonly caused by negative emotional states and health conditions related to depression. As stated by Mayo Clinics Proceedings Bupropion and its formulations may be considered as off-label treatments for HSDD in both premenopausal and postmenopausal women having HSDD. While using Wellbutrin for HSDD, it should be started with 150 mg/day, and based on the guidance of one’s physician. In about two months, the improvement of sexual function and increased libido could be seen.

The two main studies that searched for a correlation between Bupropion and a decrease in hypoactive sexual desire disorder were small studies that reported only minimal changes for women with HSDD who took Bupropion. There have been no recent studies to definitively prove or recommend that Bupropion be administered to pre or postmenopausal women to treat HSDD.

Wellbutrin is not a medication for the treatment of sexual dysfunction (SD), but in recent years, many physicians have been prescribing it to counter the SD side effects that accompany use of SSRI-based antidepressants. Still, Bupropion has not been reclassified as a treatment for this type of dysfunction. If a patient who has not been diagnosed with depression is experiencing some kind of SD, their medical doctor would not prescribe Bupropion but other treatments specifically addressing the underlying causes of their sexual problems.

Wellbutrin And Erectile Dysfunction In Men

Wellbutrin erectile dysfunction isn’t known to happen in men. In fact, sex drive in men becomes optimal when Bupropion is introduced. Moreover, one study looking at treating SD among patients taking Methadone to treat opiate addiction found that there is a progressive relationship between Wellbutrin and testosterone, as patients who received Bupropion had higher levels of the hormone as well as renewed sexual arousability. This, despite several studies showing that the drug has a neutral effect on male sexual function, as it neither increases nor decreases male libido.

Wellbutrin And Sexual Dysfunction In Women

Bupropion doesn’t lead to SD in women. It rather enables good sexual health. According to a study on the psychosexual dysfunction experienced in people of both genders, Bupropion libido effects observed in women showed healthier libido as well as better satisfaction. There are also several anecdotal accounts of women experiencing improved sexual function after having done a course of SSRI-antidepressants and experiencing negative side effects. Again, Bupropion is an antidepressant and has not yet been approved as a treatment for sexual dysfunction, as there is a potential for side effects and SD can be treated with other treatments and medications. 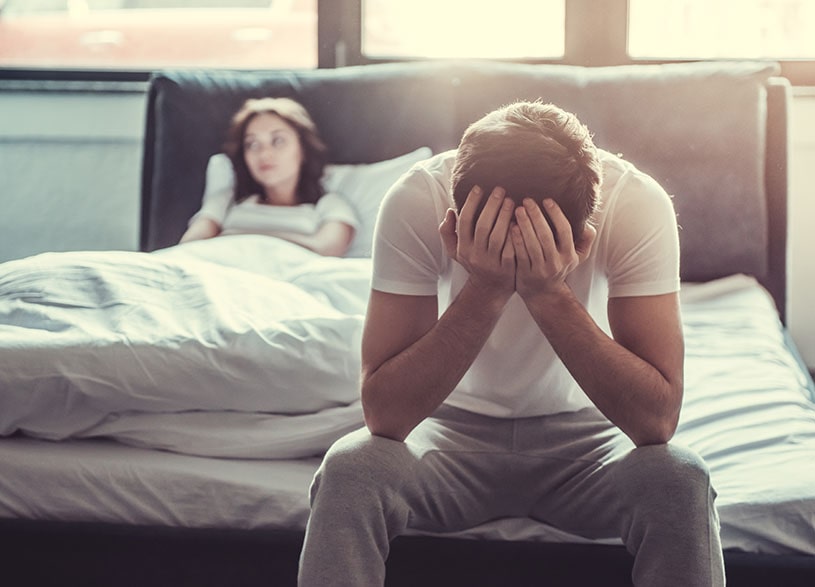 Bupropion is known as an safe and effective treatment for depression, with the potential to also treat hypoactive sexual desire disorder (HSDD) brought on by treatment with SSRI-class antidepressants. While several studies have pointed to a relationship between Wellbutrin and the improvement of sexual function, there is no conclusive evidence that is an effective treatment for this type of condition. Wellbutrin has a positive impact on libido in some cases (mostly women), but men typically experience a neutral effect. With that said, many have begun to wonder whether treatment with Wellbutrin can cause hypersexuality.

One study explored the issue of hypersexuality related to Bupropion. A man, who was undergoing the course of antidepressants, had his libido exceedingly heightened. The physicians discovered it was the Selective Serotonin Reuptake Inhibitor that had caused the hypersexuality, but not Wellbutrin. Wellbutrin does not usually cause hypersexuality. But the drug does have a propensity to increase incidences of mania, of which hypersexuality is a symptom. One woman who had been prescribed Wellbutrin as an alternative to SSRIs even experienced an instance of hypersexuality, which subsided eventually and did not cause any long-term complications.

There is some anecdotal evidence of increasing sex drive after the concomitant use of Wellbutrin with SSRIs, but further research has proven that this side effect resulted from SSRI use, not Wellbutrin. There are also too many unknowns, and scarce information available  to say concretely whether Wellbutrin can lead to a hypersexual state, as sexuality is an intermingling of many physical, mental and physiological factors.

How To Manage Wellbutrin Sexual Side Effects?

Negative sexual effects are typically associated with the SSRI-class of antidepressants, like Lexapro vs Wellbutrin, but the NRI-class of antidepressants, to which Wellbutrin (Bupropion) belongs, has been positively associated with the reverse. Several studies have shown the potential for the drug to counter the adverse effects on sexuality that patients who take SSRI present with, but it is still yet to be proven as a cure-all for non-depression related sexual dysfunction, which may have other treatments available.

Bupropion can be used by patients for improvements in their sex drive, even at a low daily dose of 150 mg/day. But a visit to a health provider must be scheduled before, as any changes in dosage may cause Bupropion overdose side effects. It takes a few months for Bupropion to improve sexual life, so one should be monitored by a medical professional during this period and search for support. It should also be noted that even though a person may experience some adverse reactions, one should never stop Wellbutrin cold turkey. Risks of Wellbutrin addiction and abuse also exist, especially during long-term treatment, and if any signs of addiction appear, one should visit a rehabilitation facility.