When it comes to looking at substance abuse, a common association would be about alcohol and smoking effects. These are two legal substances that can each cause many adverse effects, including addictive behavior. When the two are combined, however, then the focus needs to be switched to the ill effects of smoking and alcohol used together. This post looks at the combined effects of tobacco and alcohol consumption and how this duo can be harmful to the average person.

Learn About Alcohol And Nicotine:

Several substances should never be combined, as interactions can occur. Alcohol and antibiotic drugs, for example, could make pharmaceutical products less effective. In some cases, the side-effects of these combinations can be serious. This comes into play when looking at facts about tobacco and alcohol, as well as when other drugs are mixed with the substance.
Drugs and alcohol are often mixed to cause an increase in high. When looking at a more legal approach, many people are drinking alcohol and smoking tobacco products at the same time.

Even though both substances are considered legal, there are adverse effects that can occur with the person’s general well-being.

When looking at alcohol and tobacco effects, it should be noted that each of these has its associated health risks. When combined, the risks associated with these habits become even more severe. The combined effects can impact multiple symptoms of a person’s body. There are effects of smoking and alcohol on the respiratory system, cognitive function, and many other systems that perform critical roles in the body.

Opposite Effects Of The Substances

Alcohol is classified as a depressant. The consumption of this substance causes several functions of both the body and the mind to become slower. There is a reduction in brain neuron activity when a person uses alcohol. These neurons are responsible for the regulation of all bodily functions. The effects of alcohol consumption can become present even with just a small amount of the substance.
In the case where a person becomes addicted to alcohol, alcoholism will develop. In this case, the effects that alcohol has on the body become even more concerning factor.
Tobacco is not a depressant like alcohol. Instead, this substance is known as a stimulant. One particularly important issue that comes to mind here is the chemicals that are added to cigarettes. In addition to tobacco, cigarettes also contain carbon monoxide, butane, arsenic, hydrogen cyanide, ammonia, and tar. These are all chemicals that can have damaging effects on the body. 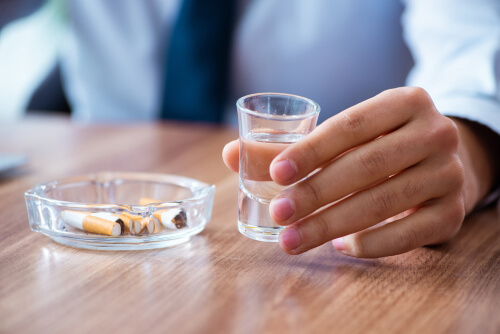 The effects of tobacco span throughout the entire body. High blood pressure develops, which is when the hard needs to work harder to get blood to pump throughout the body. This causes damage to arteries. At the same time, blood vessels start to become constricted. The nervous system is stimulated too, and the heart rate is increased temporarily after each cigarette.

When it comes to looking at the combined effects of these substances, both short-term and long-term problems come to mind.
The main issue that needs to be addressed in terms of an alcoholic beverage and tobacco combination is the fact that the two have opposite effects. Alcohol acts as a depressant and tobacco as a stimulant. This is somewhat different than combining opiate drugs and alcohol, for example. The presence of tobacco as a stimulant means the person may not feel the full effects of alcohol. In turn, they may drink significantly more alcohol than what they can truly handle.
Some studies are still being conducted on nicotine and alcohol effects.

It is known that the combination leads to a long-term increase in the risk of esophageal and throat cancer.

Statistics On Smoking And Alcohol Use

Both smoking and alcohol usage is at an alarmingly high rate. A look at facts about smoking and alcohol can help people understand the significant impact that these addictions can have.
In 2016, one study found that at least 15.5% of the US population are current smokers at the time. This was a 0.4% increase in the prevalence of tobacco smoking since the year 2015. There was also a higher trend among men who were between the ages of 25 and 64. 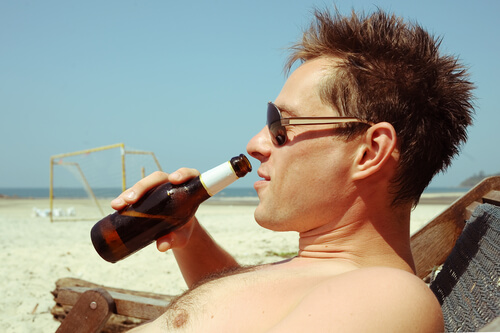 Alcohol abuse is similarly concerning issue in various areas of the world, including the United States. According to one study, at least 5.3% of the US population partakes in activities that can be classified as alcohol abuse each year. The same study found that alcohol dependence seems to affect at least 4.4% of all adults in the United States.
There are also many people who would combine other substances with smoking and drinking alcohol. An example would be those taking depression medication and alcohol together – a combination that could yield harmful effects.

Scientists often conduct research to study the effects of smoking and alcohol consumption as a combination. These two habits are both considered dangerous – and the fact that there seems to be a trend to combine the two makes the entire concern more serious. This makes it critical for people to learn about the effects of smoking and alcohol together.

Some studies have found smoking might cause a person to experience an increased risk of alcohol use. Additionally, people who are current smokers might even be more likely to abuse alcohol or participate in binge drinking more often.

Since both of these substances can cause addictive behavior to develop, experts find that the combined effect leads to a significantly worse level of addiction in a person.

The statistics of binge drinking were also higher in daily smokers compared to those participants who did not smoke at all. Among regular smokers, 69% reported frequently participating in binge drinking activities.

The same study showed an opposite connection, too. The participation in heavier drinking activities also seemed to increase the likeliness that a person smokes – statistics revealed that the majority of people who participate in heavy drinking are current or former smokers. 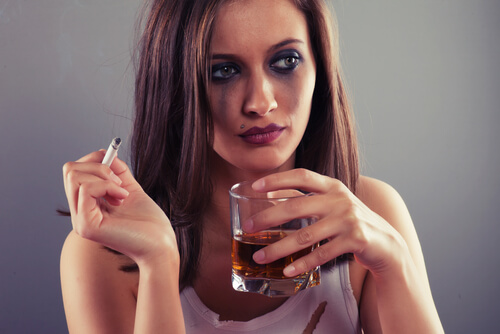 To summarize, studies indicate that up to 90% of people who are currently considered alcoholics also smoke tobacco products. Some people would also combine weed and alcohol, along with other substances – all to gain a more significant elevation in mood and the high often linked to the use of these substances. The effects of smoking and alcohol consumption as a combination lead to more serious adverse events in these patients.

Why People Consume Alcohol And Tobacco Together

Several studies provide clear evidence of a connection between alcohol and tobacco use among the general population. While scientists are still figuring out exactly the reason behind this combination, several suggestions have been made. A look at tobacco and alcohol facts together helps these experts better understand what combined effects people might be after.

Even though these might feel good at the time, these individuals need to understand the disadvantages of alcohol and smoking.

There are treatment programs that can help people who are addicted to more than one substance. Similar to those people who are taking sleeping pills with alcohol, the combination of alcoholic drinks and tobacco products can be treated effectively. There are side effects of quitting alcohol and smoking; however, which is why it is important to seek professional help.
The specific treatments that would help a person depend on some factors. Those who are trying to learn how to stop drinking alcohol and smoking together might need to be admitted to an appropriate treatment center. Whether the person has learned about tobacco and alcohol-related deaths, or want a better life for themselves, the first step remains the necessary – admittance that there is a problem with addiction.
The next step is to consider nicotine and alcohol withdrawal, which often requires professional intervention. Treatments can help to minimize the withdrawal effects while also allowing the person to stop smoking and alcohol use effectively.